Part of our 15 Minutes - 'Stats are the Dark Force?' residency lecture series
Risk from Lauren Westafer on Vimeo.

Perneger and colleagues surveyed physicians and patients about the efficacy of 4 new drugs. They were presented with the following scenarios:

While these numbers reflect the same data, patients and physicians selected that the drug that "reduced mortality by 1/3" was "clearly better" [3].  This indicates both parties are susceptible to the cognitive tricks statistics, particularly the way that relative risk make numbers appear larger and the ways absolute risk makes numbers appear smaller.  Authors can consistently switch between relative and absolute risk to maximize the appearance of benefit and minimize risks, as seen in the following abstract: 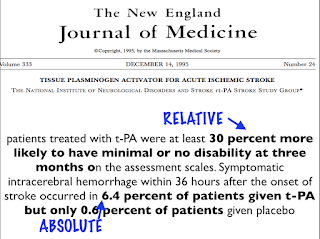 Perhap authors should be encouraged to report statistics consistently, using relative OR absolute rather than switching between the two to give the appearance of maximum benefit and minimal risk.