The Gist: For nearly 15 years, the American Heart Association (AHA) Guidelines have stated epinephrine in out of hospital cardiac arrest (OHCA) is reasonable, not that it is standard of care to administer epinephrine routinely [1-3]. A large randomized controlled trial recently confirmed that while epinephrine increases the return of spontaneous circulation (ROSC), it may do so at the expense of a good neurologic outcome [4]. We likely believe we should administer epinephrine routinely because of difficulties unlearning low-value practices.

A recent randomized controlled trial, the PARAMEDIC-2 trial, is the largest trial comparing epinephrine with placebo in OHCA. This trial brought renewed attention to the debate as to whether to administer epinephrine routinely in OHCA as patients survived more frequently with epinephrine but did not achieve better neurologically favorable survival [4]. The study was not powered to detect differences in neurologic survival, which may be difficult to do given the low numbers with a favorable outcome; however, does demonstrate this continued trend toward reviving the heart at the expense of the brain. 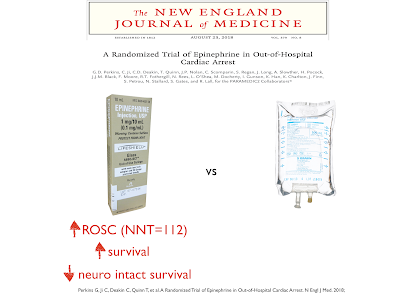 Why do we have a difficult time unlearning that epinephrine is "standard of care" in OHCA?
We rarely read the guidelines in depth.
The pocket algorithm card lists "Epinephrine q 3-5 minutes" and does not go into details about the risks and benefits of epinephrine administration. Guidelines are often long, cumbersome and difficult to read so we rely upon the synopses provided in simplified algorithms or on the simplified distillation by others.
It's harder to unlearn NOT to do something than it is to add something to our repertoire.
Many of us have a bias towards action, particularly in resuscitation. We want to save patients, we want to do whatever we can.  In OHCA, survival is poor with a mere 2-10% survival and often depends on shockable rhythm, etiology, and defibrillation [4,5]. Epinephrine may give us the satisfaction of feeling as though we are doing something in a typically futile situation.
We may be less likely to fear the consequences when they aren't proximate to our intervention.
We often don't see the downstream consequences that happen after achievement of ROSC in the emergency department - including poor neurologic function.