The Gist:  Overestimation of our level of mastery is common and is referred to as the Dunning-Kruger effect [1-3].  This effect persists in medicine and may have deleterious effects both at the bedside and in the training process [4-6].  Use of practice testing or simulation, metacognition, and the push of information to an individual may mitigate the dangers of unconscious incompetence by identifying areas of weakness and keeping the practitioner skilled.

The Case:  A 48 year old female with hypertension presented to Janus General with the sensation of the room spinning and feeling off balance for the past day.  The resident performed a head impulse, nystagmus type, test of skew (HINTS) exam, which demonstrated the presence of a saccade during the head impulse component. and determined that the patient likely had a central cause.  The patient was admitted to the hospital for questionable TIA/CVA workup, which was negative.
The Dunning-Kruger Effect - These researchers demonstrated a large discrepancy between the way incompetent people actually perform and the way they perceive their own performance level.  This discrepancy appears smaller for highly skilled individuals, who may underestimate their mastery. The studies demonstrating this effect often result in a graph akin to the one below. 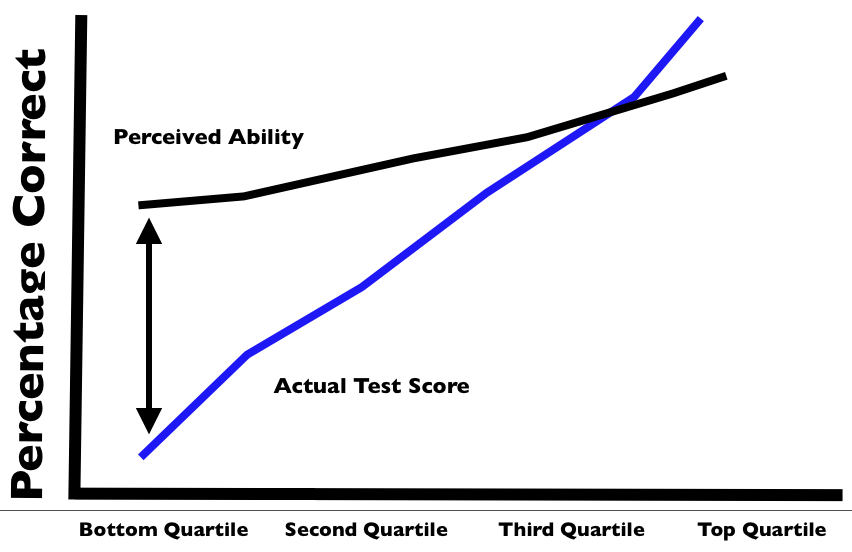 The Danger in Medicine - A little knowledge is a dangerous thing.  In medicine, a balance exists between the confidence to commit and act and the insight to see that we have uncertainty or lack the appropriate skill set.  In emergency medicine this line may be particularly difficult to walk as patients often require immediate intervention at times when data is limited, clouding certainty.

“Real knowledge is to know the extent of one's ignorance” – Confucius

Mitigating the Effect
What's the underpinning of the Dunning-Kruger effect?