Do abscesses need antibiotics after incision & drainage (I&D)
Two recent studies have rendered many with the conclusion that antibiotics improve cure and recurrence rates when added to I&D.  Talan et al randomized people with abscesses after I&D to TMP-SMX or placebo and found improved clinical cure rates in the TMP-SMX group (80.5% vs 73.6%). This year, Daum et al randomized patients to TMP-SMX, clindamycin, or placebo after I&D and specifically looked at small abscesses (<5 cm) and again found higher rates of 10-day clinical cure in patients receiving antibiotics (TMP-SMX 83.1%, Clindamycin 81.7%, Placebo 68.9%). Many people have pushed the idea that all abscesses need antibiotics after drainage based on these studies. However, these studies included patients with significant surrounding cellulitis (on average, >25 cm2) and most recommendations have historically recommended antibiotics to those with more than a 5 cm diameter of surrounding cellulitis 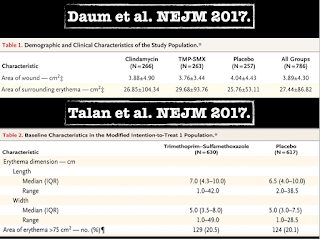 FAST is fast, but is it good?
The FAST exam, initially developed to assess for free fluid in unstable trauma patients, is widely used and may be an area where indication creep (i.e. we start expanding the indication for it) has really taken hold. Holmes et al performed an RCT on 945 stable pediatric blunt trauma patients who were randomized to standard trauma evaluation + FAST or just a standard trauma evaluation. There was no difference in rates of CT scans (~50% in each arm), missed intra-abdominal injuries (n=1 in FAST arm), or hospital charges. Even things like length of stay and hospitalization rates were about the same between groups. 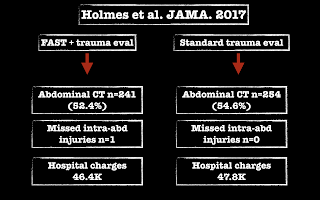 A magic sepsis cocktail?
Marik et al have made a wave in public media for a magic sepsis cocktail of vitamin C, hydrocortisone, and thiamine. In this paper, they published their findings of a paltry 47 patients who underwent treatment and report an incredible mortality reduction in the cocktail arm (8.5 % 4/47 vs 40.4% 19/47). The primary author, very well respected in the sepsis/critical care community, has argued that this treatment should be adopted immediately because prior studies show biological plausibility. However, this is a supremely tiny hypothesis generating study subject to incredible bias (see this podcast) due to no blinding and other factors. Further, prior studies of individual components (ex: steroids) have been negative.

Haloperidol HUGS and Love
Gastroparesis and cyclic vomiting patients are frustrating and often their medication allergy lists are extensive. Enter haloperidol, a butyrophenone antipsychotic (dopamine antagonist), a sister medication of droperidol. Roldan et al randomized 15 patients with gastroparesis to 5 mg IV haloperidol + conventional treatment and 18 patients to conventional treatment alone. Pain and nausea dropped from 8.5/10 to 1.83 (pain) and 4.53/10 to 1.83 (nausea) at 1 hour in the haloperidol group compared with a drop from 8.28 to 7.17 (pain) and 4.11 to 3.39 (nausea) in the placebo group. Another small, not especially well done observational study, termed HUGS, by Ramirez et al echo these findings.

PERC - Love it but ignore it?
It’s well accepted that in a patient with low pretest probability (15% or less, i.e. Low Risk by Wells Criteria), we can rule out pulmonary embolism (PE) using the PERC criteria. The miss rate using this approach is <2%, which is the cut point where further workup and treatment would cause more harm than good (test-treatment threshold). Apparently, we suck at actually following this evidence based approach according to a prospective observational study by Buchanan et al of patients with chest pain and/or shortness of breath looked at PE testing rates in PERC negative patients. Over 25% of patients who were PERC negative underwent further PE testing and 7.2% went straight to CTPA or V/Q, skipping the d-dimer. 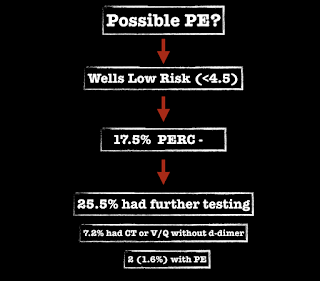 The End of Apneic Oxygenation?
Placing a nasal cannula at 15 LPM (or more) during RSI has become pretty standard practice in many ED rapid sequence intubations (RSI), often deemed apneic oxygenation (ApOx). The ENDAO trial randomized 206 ED patients undergoing RSI who had at least 3 minutes of preoxygenation to ApOx or no ApOx. Nobody was blinded. The study was looking for a difference in lowest mean oxygen saturation before groups, which they did not find (92% vs 93%).

Steroids for all that wheezes?
Many patients with lower respiratory tract infections (LRTI), particularly with wheezing, receive empiric steroids, inhaled beta-agonists, and possibly antibiotics (such as azithromycin), yet the evidence behind this is scare in patients without underlying lung disease (asthma/COPD). Hay et al randomized 401 patients presenting to outpatient clinics with cough and signs of LRTI who had no history of asthma or COPD to either 40 mg prednisolone daily for 5 days or placebo. They found no difference in duration of moderately bad or worse cough (~5 days in each group) or severity of symptoms on days 2-4. Of note, about 40% of the patients in this study were wheezy.

Bonus Throwback(Cutting Edge from 2010) - Stop the pulse checks in codes
We are terrible at pulse checks - they are inaccurate and insensitive. The pulse check during a code (i.e. after the initial <10 sec pulse check by a healthcare provider to establish arrest) is nowhere in ACLS. Nada. The 2010 AHA Guidelines state: "Because of difficulties with pulse assessments, interruptions in chest compressions for a pulse check should be minimized during the resuscitation, even to determine if ROSC has occurred." The ACLS guidelines recommend pulse checks during CPR only if an organized rhythm is seen


There’s been a lot of talk about the gender pay gap, but surely it doesn’t apply to academic emergency medicine, right? Wrong. Masden et al used 2015 survey data from full-time faculty academic emergency physicians and found that women made > $19,000 less than men. You may say that doesn’t account for rank, fellowship status, administrative roles, location, clinical hours, etc. But again, that would be incorrect. That gap was after adjusting for all of these potential confounders.
Posted by Lauren Westafer at 12:45 PM