Breastfeeding and Alcohol: A sensational but flawed study in Pediatrics

The Gist: A recent study by Gibson et al in Pediatrics claims to show a link between cognitive delays and alcohol intake while breastfeeding [1]. Despite wild uptake by lay and medical news outlets, this study is seriously flawed by confounding, multiple comparisons, and inappropriate extrapolation of survey data. As a result, the study findings do not support this conclusion and do not support a causal link between drinking alcohol while breastfeeding and cognitive delays. Breastfeeding while inebriated may pose risks due to safely handling the baby and safe sleeping, but unlikely from the alcohol contained within the breastmilk in otherwise healthy term babies. Further, high-risk alcohol use (binge drinking, dependence) may be associated with other factors that could potentially influence the cognitive and emotional development of children. However, this study only shows our obsession with p values and statistical significance. 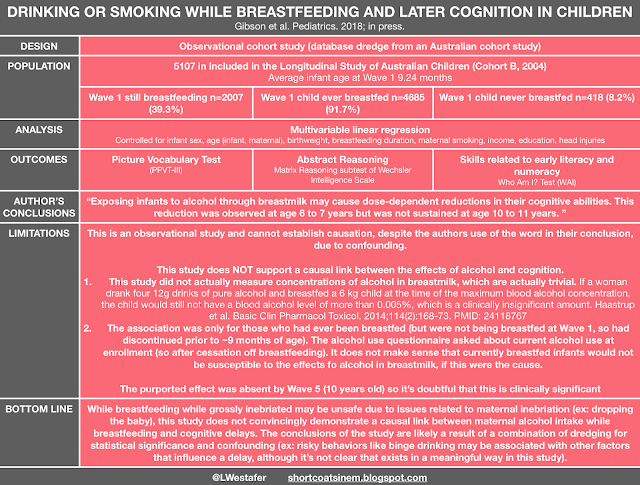 Gibson et al hypothesized that alcohol use during lactation would be associated with lower cognitive scores in children [1]. The lead author has said, "it suggests that there is no safe level of alcohol for a breastfeeding mother to drink" [2]. However, the study does not actually suggest this. An overview of the study can be found in the graphic above.

1. Misunderstanding the term breastfeeding
The authors inappropriately describe "drinking while breastfeeding." Consuming alcohol while lactating is not the same as drinking while breastfeeding, although it is unlikely that either have clinical significance in most scenarios. The questionnaire administered at Wave 1 asked about general current alcohol intake and whether or not the infant was breastfed (in general). They did not ask about the specific timing of drinking, not that this necessarily matters. Further, the authors did not measure alcohol concentration in the milk they were feeding their infants, which would really be the only way to demonstrate causation (which would be an impossible study to conduct, yet the authors used the word "cause" in the manuscript).

Alcohol intake during breastfeeding has been controversial as it is known that alcohol does transfer into breast milk [2]. Official recommendations are to refrain from drinking while breastfeeding or limit to 1 drink per day based on this notion [3]. However, the amount of alcohol an infant would ingest is minimal as the percentage of alcohol in the breastmilk approximates that of the mother's blood alcohol level (or approximately 5% of the intake) [2]. Further, milk production and composition is a dynamic process such that when an individual is no longer inebriated, the breastmilk does not contain alcohol [2]. As such consuming alcohol and directly feeding the baby at the time of peak ethanol effects is different than consuming alcohol at a time period when the mother is not feeding the baby (ex: immediately after nursing or at night).

2. Multiple comparisons
Only one transient, statistically significant association was found, as seen below. Children who were ever breastfed, the bulk of whom were not being breastfed at the time the alcohol questionnaire was administered (~age 9.7 months), with mothers who had scores associated with high or risky alcohol consumption performed less well on the Matrix Reasoning subtest of the Wechsler Intelligence Scale at Wave 4 (~age 7) but not Wave 5 (~age 10). The more comparisons, the greater likelihood of finding a positive association due to chance. While these authors did use the Benjamini and Hochberg procedure to control the false discovery rate (proportion of false positives), the bulk of the data including the vocabulary test and the early literacy/numeracy tests do not support this association.

3. Data dredging: p-value without clinical significance
Researchers have an obsession with p values. This study had greater than 99% power to detect a small effect size. Even with this power, the study did not detect an association in 6 of the 7 time-outcome combinations they evaluated. Yet,the authors focused on the single statistically significant association that was not found on follow up tests (i.e. a child whose mom had ever breastfed them and engaged in high/risky alcohol use at Wave 1 performed less well on the matrix reasoning test at Wave 4 but performed on par with peers at Wave 5). Additionally, if it were the alcohol that resulted in the lower scores, we would expect to see the same (or greater) results in infants who were currently being breastfed.

Even if this association was real rather than a statistical anomaly, the kids who were being breastfed at the time of the alcohol questionnaire had no measurable deleterious cognitive outcome at follow up.

4. Lack of an adequate control group and missing data.
Just over 8% of infants were classified as "never breastfed." This is a tiny group with few expected outcomes. Additionally, this cohort had significant missing data, notably 17.2% missing data for alcohol consumption.

Most physicians lack significant training regarding the care of lactating patients and advice regarding "pumping and dumping" (pumping and discarding milk instead of feeding it to the baby) is rampant, even when medications are safe in lactating patients [3]. For example, as recently as 2017 major anesthesia texts recommended empiric "pumping and dumping" for 24 hours following anesthesia [4,5]. Studies such as the one by Gibson et al, which has been picked up by news outlets, only serve to increase fears without actually contributing meaningfully to the knowledge base [1]. It is time to move from the overly cautious approach to the lactating woman to a reasonable, evidence-based approach in order to support breastfeeding without creating hysteria amongst parents.

Posted by Lauren Westafer at 9:27 AM