Fluid Resuscitation in Patients with Sepsis and Heart Failure, ESRD, or Cirrhosis

The Gist: While an article in Chest by Khan et al reports no association between 30 cc/kg of fluids in patients with congestive heart failure (CHF), end-stage renal disease (ESRD), and cirrhosis and intubation, this study should not be used to justify administration of 30 cc/kg of fluids in these patients. Rather, the decision to administer volume should be made according to the individual patient scenario, particularly given the lack of evidentiary basis for this specific volume of fluid.


In the United States (US), a standard part of resuscitating patients with severe sepsis and septic shock includes a crystalloid fluid bolus of 30 cc/kg within the first 3 hours. The Surviving Sepsis Guidelines give this a strong recommendation based on low-quality evidence. In fact, the guideline states that this recommendation is based on essentially no evidence other than this was the average volume of fluids given in trials (PROCESS, ARISE) [2]. In the US, clinicians are incentivized to administer this volume in the first 3 hours when treating patients with septic shock as it is part of the SEP-1 core measure. This quality measure is an "all or none" measure, in which many components of treating patients with severe sepsis/septic shock must be met to satisfy the measure. It may seem that 30 cc/kg of fluids is not that much, only ~2 L for a 70 kg patient. However, fluids are not benign and may pose a risk in patients with a tenuous fluid balance at baseline, particularly heart failure (HF), end-stage renal disease (ESRD), and cirrhosis.

In a study published in Chest (February 2020), Khan et al boldly conclude "We detected no difference in the incidence of intubation in the high-risk cohort of cirrhotic, heart failure, and ESRD
patients with sepsis who received SSC guideline-concordant (30 mL/kg) vs restricted fluid resuscitation. Based on our results, we suggest that guideline-based early fluid resuscitative efforts should not be omitted in patients with cirrhosis, CHF, and ESRD solely for concern of acute respiratory failure" [1]. The basics of the paper can be seen below: 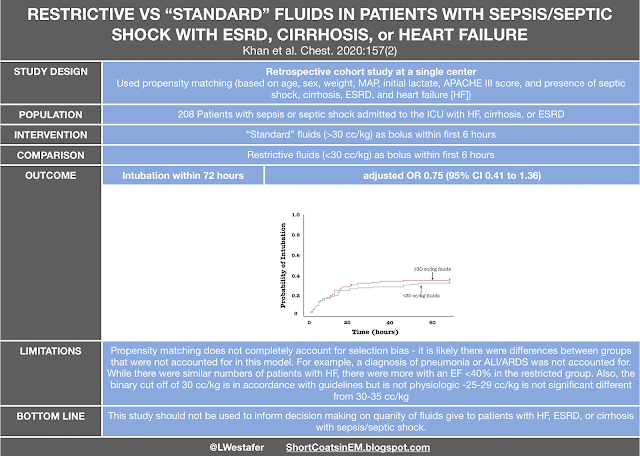 Unfortunately, this study provides limited insight into whether it is actually safe to administer 30 cc/kg of fluids to patients with HF, ESRD, and cirrhosis.

This study is a retrospective cohort study, with limited propensity matching. This study design may provide some tentative insight into associations but can certainly not provide a definitive conclusion. Additionally, for this type of study design, there are some limitations with this particular study.
The binary cut-point of 30 cc/kg is an understandable cut-off based on guidelines, but also somewhat arbitrary. In this study patients were grouped according to fluid administered as boluses (excluding those administered in the prehospital setting) in the first 6 hours as either "restrictive" (<30 cc/kg) or standard (≥30 cc/kg). Thus, a patient receiving 29 cc/kg would be classified as restrictive even though they received 70 cc (2.4 oz) less than a patient in the standard group. This is a trivial volume of fluid. However, the standard group did receive, on average, about 2L more crystalloid in the first 2 hours which does suggest an actual difference between groups. Yet, it might make more sense to analyze ≥30 cc/kg and <15 cc/kg.

The data actually suggests the groups are fundamentally different. The Kaplan-Meier curve in the article, replicated below, actually shows a trend towards increased probability in intubation after ~18 hours. While propensity matching attempts to mitigate selection bias, it cannot fully do so. The restricted fluid group had a higher probability of intubation throughout much of the study period, either due to their baseline disease or uncaptured clinical factors. Patients who were given ≥30 cc/kg were probably deemed by clinicians to be able to "tolerate" the fluids. This inflated probability may make a difference between the two groups disappear. 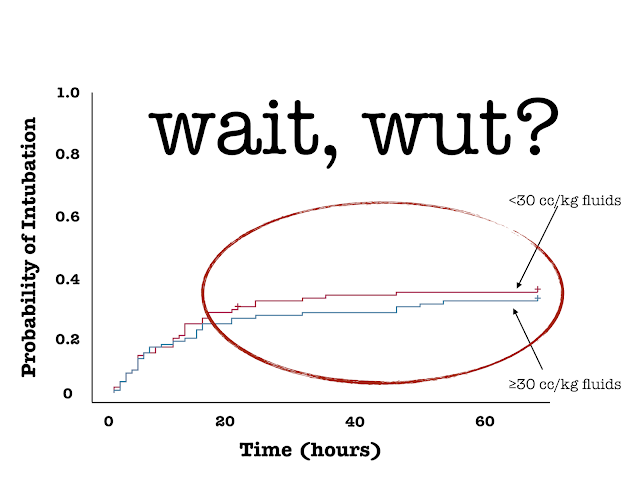 Posted by Lauren Westafer at 12:48 PM