Anchors Aweigh! Cognitive Bias - Where IS This Ship Headed?

The Gist:  We all succumb to cognitive errors from time to time.  Identifying these errors in our medical decision making though exercising metacognition may improve patient safety but it may also allow us to be better clinicians.  NB:  This is not a comprehensive review of all types of cognitive biases, which one can find here in "List 1."  Rather, this is a synopsis of some of the commonest cognitive biases, which I've learned from first-hand.
Anchoring Bias - when a first impression or one piece of evidence exerts undue influence in the diagnostic process.

Triage Cueing - bias initiated by the patient's initial triage level, assuming that a patient can't be sicker than their triage level.
Premature closure - when one accepts a diagnosis before verification of the diagnosis.
Confirmation bias - look for evidence to confirm the hypothesis rather than searching for evidence to refute.

Search Satisfying - the tendency to cease looking for other findings/disease processes once something is found. 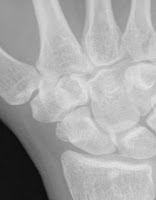 Scaphoid Fracture!
Availability and Non-availability - the greater prevalence (in the ED,literature,community,news,etc), the more likely we will think of and pursue the diagnosis (and the converse also holds true).
Ascertainment Bias - one sees what one expects to see (self-fulfilling prophecy)
As a student, I force myself to generate 5 items on a differential before I present.  Sometimes this is ridiculous and a clear stretch but I use that tiny bit of time to think about why I'm thinking the way I am and potentially identify some of my cognitive bias.  As information comes in from further evaluation, diagnostics, etc I look at the data and integrate it into my leading diagnosis, as well as my differential.  It really doesn't take additional time if I force myself to do it every time.

We will never be able to eliminate all errors, especially since systems errors play an enormous role in medical errors (and contribute to cognitive error), but perhaps we can train ourselves to reduce those that are in our control.  Life in the Fast Lane provides some succinct case-based insight into cognitive errors with these case scenarios.  There's some argument that recognition of these biases may not translate into meaningful patient outcomes, but I still think it's good form to think with intention and act when necessary.  Also, if you haven't yet, check out Dr. Patrick Croskerry's  free lectures,  on the subject (most span all of clinical decision making and errors).