Euboxia - Not Necessary (Or Necessarily Normal)

The Gist:  In medicine, we historically strive towards achieving values that fall within a reference range, or are normal, a phrase coined "euboxia" [1].  Targeting treatments to normalize values may not result in patient-oriented benefit and may cause harm.  We must also consider that normal values may not necessarily be normal for our patients.  Data fatigue, the exposure to copious data, may lead to ignoring values that are not flagged as abnormal, regardless of the appropriateness for a patient.


"'Euboxia' (from the Greek 'eu' meaning good, normal or happy, and 'box' from the tradition of writing physiological variables in boxes) is a colloquial word used in many North American and other hospitals to describe the state of apparent perfection aimed at by residents by the time they present their patients on morning rounds" - MC Meade [2].

Euboxia Is Not Always Necessary
Chris Nickson's Free Open Access Medical education (FOAM) post on Euboxia highlights some of the pitfalls with this obsession with normalcy. He also delivered a talk Euboxia and (ab)Normality at SMACC Gold which will hopefully be available on the SMACC podcast in the near future. A few examples include:
Euboxia Is Not Necessarily Normal
Euboxia, however, may fool also practitioners into a false sense of security.  Failure to truly see a value that appears normal and isn't flagged, red, or outside of the box may be problematic. A few examples:

Normotension - Hypotension typically refers to systolic blood pressure <90 mmHg or a drop in systolic blood pressure >40 mmHg.  The latter part of this definition is often unable to be determined (due to lack of information) or forgotten.  The trauma literature seems to have solidified around the notion that the widely accepted definition of hypotension does not apply to many trauma patients, particularly those > 65 years old, and that 110 mmHg is probably a better cutoff [9-12].  While these recommendations have been out since 2011,  90 mmHg remains the common cut point for hypotension.
Normal White Blood Cell Count (WBC) - Leukocytosis is often used as a predictor of infection/inflammation and historically loved by surgical services, yet the operating characteristics don't perform that well.  During a lecture as a medical student Dr. Sean Fox (PEM Morsels) shared the following perspective on the WBC, "WBC is the last bastion of the intellectually destitute." 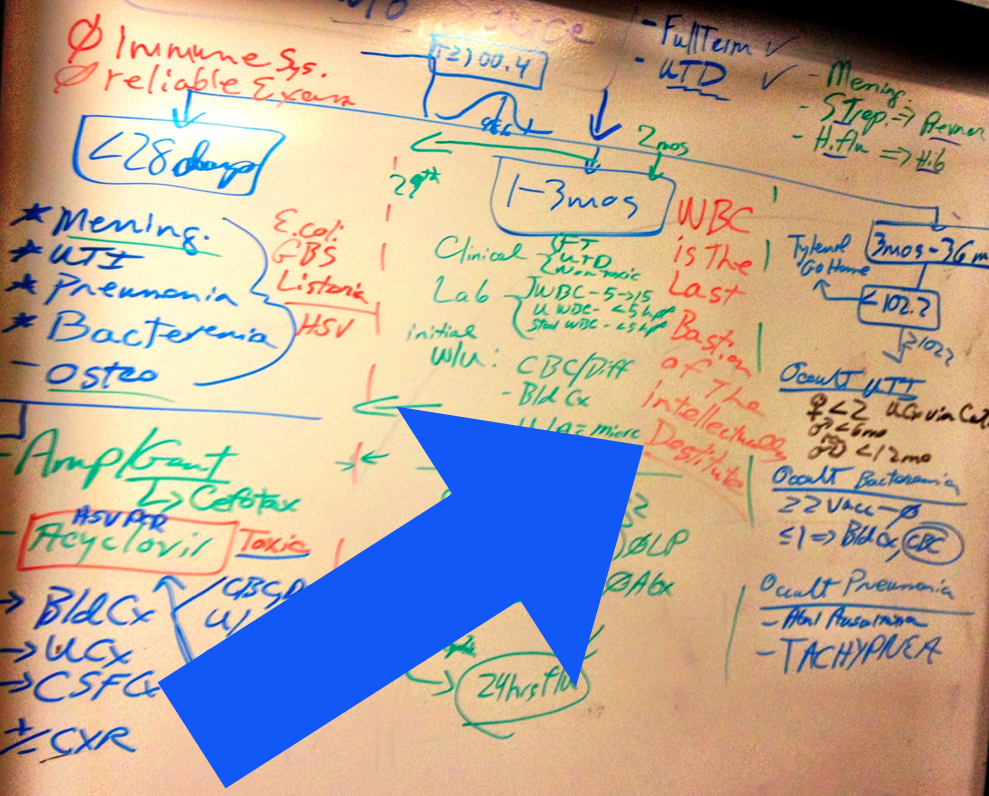 I soon discovered that the sensitivity and specificity of leukocytosis, or the absence thereof, wasn't helpful in many situations.
Normal Potassium in DKA - The reference range for potassium runs approximately 3.5-5 mEq/L.  Patients presenting in DKA may have low normal potassium concentrations but have severe total body potassium deficits.  As a result, professional societies recommend withholding insulin if a patient has a potassium <3.5 and supplementing potassium even when values are well within the upper "normal" limit of 4-5 mEq/L [14].  Despite these teachings and nearly habitual practice, without mindful attention to the potassium the "normal" lab value could easily be ignored.

Normal Lactate - Lactate is beloved in Emergency Department (ED) care and it's well accepted that elevated lactate values predict mortality.  Yet, normal lactate levels may be falsely reassuring.  Lactate has been used as screening test in mesenteric ischemia as small, early reports yielded a sensitivity of 100% [15].  More recent analysis, however, show that the +LR 1.7 (1.4–2.1), -LR 0.2 (0–2.9) for L-lactate.  The -LR for lactate crosses 1.0, demonstrating that a normal lactate is not useful in crossing mesenteric ischemia off the list [16].  While we may cognitively understand this notion, in practice I think we quite often feel reassured by normal lactates (or reassure the admitting teams).

What to do?
Data overload and obsession may engender a sort of "data fatigue."  It is difficult to notice abnormalcy in data that may appear, for most individuals, normal.  This may be particularly arduous in a sea of numbers.  Furthermore, our attention is typically drawn to the red or flagged "abnormal" numbers.  This is not to suggest that we should agonize over every value and cannot trust anything "normal."  Rather, it seems that the signal in medicine is that tests and parameters are only as good as the context of the patient and the provider interpreting them. Here's what I'm trying, to combat my own data fatigue and subconscious euboxic thinking:
References:
1.  Reade MC. The pursuit of oxygen euboxia. Anaesth Intensive Care. 2013;41(4):453–5.
2.  Reade MC. Should we question if something works just because we don’t know how it works? Crit Care Resusc. 2009;11(4):235–6.
3. Nickson CN.  Don't Put Your Patient In A Box.  Life in the Fast Lane.

Posted by Lauren Westafer at 7:30 AM